David Swindle Crime Solutions has been involved with the tragic case of Craig Mallon for several years.  As you can read below, Craig was killed with one punch while on holiday in Lloret de Mar.  He was killed amidst crowds of people, many of whom must have witnessed the fatal assault, but possibly did not even realise he was dead as he lay on the ground.  We are still searching for vital witnesses to this horrific crime,  who may hold that one piece of information which will bring about closure for the family.  Recently we did have a break through and a Commission Rogatoire has been initiated by The Spanish Judge for the French Authorities to interview French individuals of interest to Craig’s homicide We await the outcome of this international judicial process.  In the meantime, our team of experts works tirelessly to bring about justice for Craig and his family.

Ian Mallon has lived without his son Craig for 8 years now, in the sad knowledge that Craig was the innocent victim of a violent murder.  It is difficult to accept that Craig has gone, but harder to accept there are still people out there who hold important information about his death, yet they have remained silent and failed to come forward. In those 8 years, Ian´s wife Antoinette has passed away leaving him alone to the silence that is the torture of a parent. 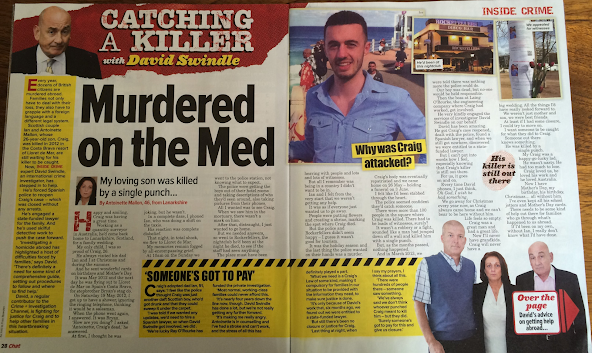 Just after he left Rockefellers Disco Bar Craig was murdered on the corner of the square where Rockefellers, Texas and Revolution Disco Bars are in Lloret de Mar, Costa Brava, Spain,  in the early hours of  Saturday 19 May 2012, in a motiveless and unprovoked attack.  He was punched or kicked in the head and fell to the ground dead.  Craig was a 28 year old graduate and surveyor from Lanarkshire in Scotland.  Highly respected in his field and much liked by his employer and colleagues.

The nightclubs and bars had just emptied and it was shortly after 06.15am when Craig was murdered.  The square was full of people of all nationalities, chatting and ending their night out.   People were looking for taxis and wandering off home and back to their hotels. Due to the late opening of Spanish venues, this was actually the early morning of 19 May 2020 and people were also on their way to the train/bus stations, looking for taxis to take them to the airport etc and tourists were seen wheeling their cases through the square.  We estimate there were upwards of 70 people in that square on the 18/19 of May, but to date, we have interviewed only a handful of people, so there are many more people out there with information who have remained silent.

Craig’s dad Ian said “Please do not assume that we know what you know.  No matter how insignificant the piece of information you have might seem, it just might be the breakthrough in this case, so please contact us now” .

“Please do not remain silent, please help me find out who killed my son” .

David Swindle, the highly respected and experienced former murder detective, has undertaken a full case review of Craig´s murder and has identified a number of significant witnesses who were not interviewed by the Spanish Police.  Hence, 8 years down the line and with no significant advancement of the case by the Spanish Authorities David´s multilingual crime team have gathered massive amounts of intelligence and identified potential evidential opportunities.

The resolve of Craig´s family and dedication of David´s team continues despite the fact it´s been 8 years.

David said “the passage of time should not be detrimental to the detection of crime, indeed only last month we had an encouraging development when our team in Spain identified key people at the scene that fateful morning, who are still in dialogue with us helping piece together their recollections of events”. 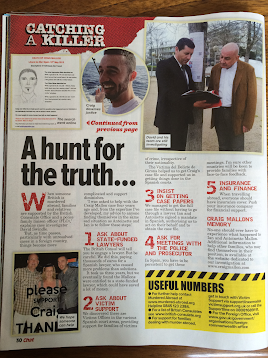 David’s investigations indicate French people will have vital information,  however,  they have never been interviewed or provided  information.

Ian Mallon has written to one French man who was part of a group of 4 men, confirmed from CCTV analysis as being near the square at the time Craig was murdered,  who could be vital witnesses,  however this man has indicated he is unable to assist or provide a statement.

Follow this link to see CCTV of these men who we believe may live or work in or around the Paris area.

It is believed these 4 men were with other French men and girls in Lloret de Mar that weekend, who may have vital information which can assist Craig’s family.

Witnesses refer to French people being at the scene and involved in the disturbance associated with Craig’s death, so David’s team are keen to speak to ANY French people in the area when Craig was killed.

David Swindle said, “ There are so many references to French people but sadly not one French person has come forward to help Craig’s family piece together what happened. Why has there been such a wall of silence regarding this tragic loss of a young life”?

Did you see, speak to or overhear any French people?

Other witnesses speak of a man throwing martial arts poses on the square at the time of the incident and showing off martial arts style punches and kicks.  Do you know this man perhaps through martial arts?  Is he Spanish, French or some other nationality?

Did you see him in Spain on the Lloret de Mar square or area where Craig was killed?

Are you that person?  You could be a vital witness.  Speak to Craig’s family and their team now.

Ian Mallon said “Now is an opportunity for these people to come forward, do the right thing and speak to us, because I will not stop until the killer of my son is found and I am satisfied everything has been done”.

Ian Mallon has endured the silent torture for many year but he remains single minded that he will not rest until this case is solved.

Remembering back to 2012 might not be that easy, so to help you, it was the year of Queen Elizabeth´s Diamond Jubilee, the year we lost Whitney Houston, London hosted the Olympic Games, storm "Sandy" hit the Caribbean, USA and Canada and the Costa Concordia cruise ship sank, and  Francois Hollande was elected President of France.  On 19 May 2012,  Bayern Munich played Chelsea at the Allianz Stadium in Munich, Germany and Shakira and her husband Gerard Pique visited Lloret del Mar going to the Fenals Beach and later to the Magic Park, it is possible they also went to a nightclub in LLoret.  So cast your mind back and see if you can help solve this murder. 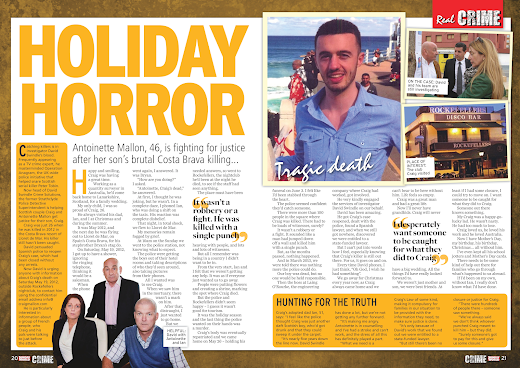 Any information at all regarding what you think may assist and would really help piece together what happened to Craig, particularly regards:-

•             4 French speaking males perhaps of middle eastern/North African extract, believed to come     from around the Paris or central France area.

·         During the incident which killed Craig, a French male voice was heard to shout “fils de pute” meaning “son of a bitch”.  Did you hear that shouted?  Did you see who shouted it?

·         Craig’s dad appeals to local hotel staff, bar staff and doormen to think back and said:-  “Do you have any information at all regarding French people please contact us as we are certain French people have the answers to who killed Craig.”

A Mystery Caller who Witnessed the Incident

·         A call was made by an English speaking woman to the emergency services in Lloret del Mar at 06.26am.  She may be English, or of another nationality but a fluent English speaker. She is one of several witnesses who talks about the tall man around 1.9m (6ft 3in) and others who were at the scene.

·         This woman´s information is vital and regrettably she was not interviewed or asked to give a statement by the Spanish police. This woman will remember what happened that night as it is highly unusual to witness such a violent crime.  We would ask her now to contact us so we can speak to her.

·         Do you know this woman?  Did she tell you about what she saw, or tell you that she made a call to emergency services?   Have you heard rumour about someone at the scene who saw what happened and contacted police, but was never followed up on?

People in the Area When Craig was Killed

·         Were you in the square outside Texas and Rockefellers Disco Bars or Revolution Disco on 18/19th May 2012 maybe chatting to friends or speaking to the doormen?

·         Did you hear a disturbance on the square but were unsure what had happened?

·         Maybe you did not realise that the disturbance would become a murder investigation.  Come forward now and speak to us, even the smallest piece of information could help.

Craig´s family and David´s team accept that the person who killed Craig may not realise that Craig died and may not have meant that to be the outcome.

David said “If you are that person, we are here to speak to you, we will listen to your side of the story with impartiality and help you to resolve this issue,  which must weigh heavily on your mind.  Please come forward now, we have multilingual speakers if your first language is not English, ready to speak to you“.

In summing up, Ian Mallon said "The day Craig was taken from us, all the light went out of the house and out of our lives.  Antoinette was never the same again and I believe she just gave up on life and passed away without the closure we need.  I hope no other family is ever put in this position again, it has devastated us".

Since last month´s Baywatch feature on Kirsty Maxwell’s suspicious death in Benidorm, Spain there has been a lot of publicity regarding the 3 year “anniversary” and a lot of empathetic response.

In addition to the Kirsty Maxwell website please also share details of the Kirsty Maxwell Charity www.kirstymaxwellcharity.co.uk set up by Kirsty’s family to support families unfortunate enough to find themselves in the same tragic circumstances as Craig Mallon´s family.

You can contact David Swindle at David Swindle Crime solutions by email to david@davidswindle.com or info@multilingualcrime.com or call us on UK 07956 210600 or International +44 7956 210600. 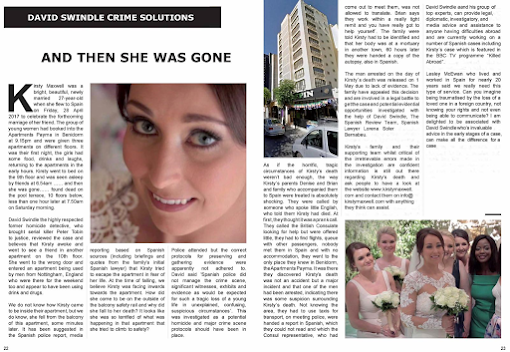